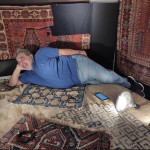 I am truly delighted to announce that the San Francisco ARTS show is back with a vengeance! Opening on Friday December 3 at 2.30 pm, it will be hosted, just like the good old days, at the near- mythical Motel Capri, a true gem of American 50’s design dominating the corner of Greenwich and Buchanan streets in the Marina district. This three-day extravaganza of antique rugs and textiles draws dealers, collectors and cognoscenti from around the globe.

Now in its 12th season, I feel especially close to this show as I am one of its founding members. The Capri was the accommodation of choice for most of the rug dealers exhibiting at the San Francisco Tribal and Textile Arts Show, which still takes place in February at the nearby Fort Mason (although the the 2021 event was only virtual). We all used to ship our goods to the Capri, and many of the local collectors would visit us the day before stand dressing and voraciously buy some of the best pieces we had reserved for the exhibition. The motel rooms offered adequate privacy for such swift transactions and most of us ended up doing more business there than during the show itself.

This prompted us to imagine the Capri as the actual venue, an idea that was taken up very enthusiastically by an international roster of colleagues covering virtually every facet of antique textile arts. In October 2008 the entire motel had been transformed into a variegated bazar, its parking lot looking like a contemporary equivalent of a 19th-century Middle Eastern caravanserai. Ancient textiles hanging down mid-century modern balustrades welcomed crowds of passionate rug aficionados who would dare venture into the belly of the Capri through its twisting alleyways and staircases. The motel rooms were each taken up by respectable members of the antique rug trade, where rare masterpieces were hanging from black cardboards panels, carefully lit in the best manner a 50’s motel room could possibly accommodate.

As most of us will still be jet lagged, the show has truly flexible hours, with many transactions happening well into midnight. Some of us eventually fall asleep on queen-sized beds covered with woven tribal trappings of every stripe, while others congregate in the corridors and balconies or in the ground-floor rooms in a never ending party of kindred spirits.

The heady feeling of camaraderie is still what, in my opinion, distinguishes this show from all others. Even in such dire times, when travelling is beset by myriad restrictions, many of us are ready to invest in the extra effort necessary to make this event happen. At this point we have achieved an ever-expanding, international and multicultural family that draws valuable sustenance from at least one reunion a year. We look forward to greeting a plethora of friends ranging from rug collectors and museum curators to people who simply wish to learn more about antique textile art…all are early welcome! 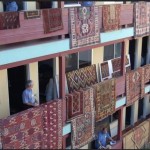 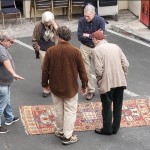 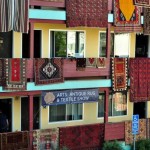 The Hali Colloquium in Italy 2023

HALI has organized several highly interesting and special events in Italy 5-11 February 2023 to precede the two-day colloquium and expert conference “Kerman Carpets of the Safavid Period (1501-1736)” 10-11 February in Genoa. Conceived as a celebration of the wealth of antique carpets and textiles in Italy, a week of talks, guided museum visits and […] 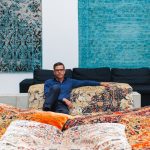 Jan Kath – Contemporary Rug Art When in the Fall of 2002 I became acquainted with Jan Kath, then a young and very promising contemporary rug artist, I hadn’t realised that soon my career would take a very significant turn. We had been introduced by Ben Evans, who at the time was a senior editor […]